*I’m not affiliated or working with this company or any other company in this post.

The DeVore Business and Industrial Park has been thriving in these last few weeks. The Great Husbando has been working as a trainer for a new set of cubicle drones. I’m not using this phrase in a malicious manner. Actually, I often romanticize certain things because I watch too much TV. “Cubicles” are one of these things. Since I don’t work a 9-to-5, the idea of working in one intrigues me.

You have your own space while also working with others? Fantastic!

You can put hilarious passive-aggressive notes on your cubicle wall when you don’t want to see others? Sarcasm at its finest!

You can decorate your space to show off your personality? How creative!

When you get lonely, you can poke your head into other cubicles, then run to your own when you don’t want to see people? That’s the right amount of “social” for me!

Of course, this is coming from someone who doesn’t have to deal with the fishy-smelling microwave, burnt popcorn smell from the hallway, mandatory-yet-pointless meetings, and the actual 9-to-5 work. My enthusiasm is probably misdirected.

Something I’m OBSESSED With:

Storytime! Okay, so I’m going to try my best not to spoil the riddles of the parcel I received from The Mysterious Package Company.* Instead, I will omit the contents of the package, while still telling you the sweet, sweet story behind it.

A couple weeks ago, I mentioned it was my five-year anniversary with The Great Husbando. Our actual anniversary was a roller coaster of emotions. Sadness (when we found out our friend had passed away), happiness (at being together for over a decade and married for five), and fear. A surprising amount of fear.

Both of us had to work that Friday but I finished my workday early. I was nearly snoozing on the couch when we heard someone on the front porch. The creaky steps. The thud of a package. The knock on the door. Then more creaky steps as the person walked away.

I pondered over what embarrassing 3AM Amazon purchase had suddenly arrived on my doorstep.

The Great Husbando wondered also. He opened the door and brought in a heavy cardboard box with my name on it. I looked up at him with wide eyes.

He placed the box in front of me. Other than my name and address, it was unmarked. So I opened it, only to see a [REDACTED] sitting on top of a wooden crate. The [REDACTED] looked [REDACTED] and it read [REDACTED]. Mysterious, no?

Excited, I tried to open the crate but found it nailed shut. It was actually nailed shut.

I read the [REDACTED] out loud. Halfway through the [REDACTED], The Great Husbando actually got up and waved his hands around while chiding me. “WHY ARE YOU READING IT OUT LOUD? YOU’VE SEEN HORROR MOVIES? WE’RE ALL GOING TO DIE!”

But, I mean, I had already started so…

Seriously, the amount of detail in the experience and the actual items in the package are amazing. If your family or friends aren’t much for horror, they have other themes as well. Highly recommend. 10/10 would scare again. 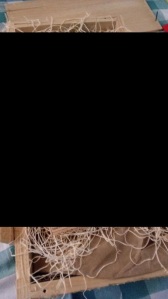 So now the [REDACTED] sits on my desk alongside the wooden crate, which I love because it fits the aesthetic of my office. I even have my Miskatonic University class ring sitting on it, as well as my Cthulhu pendant. Before I die, I want to bury everything in a metal tin (or something) so archeologists in the future can dig it all up and my ghost can laugh and laugh as I watch them try to figure out the puzzle.

I digress. Honestly, I think part of the fun was seeing The Great Husbando’s reaction to the whole thing. I’m sure my reaction was interesting too but the look on his face… Hahaha!

I was convinced he bought it for me but he adamantly denied it. “I wish I could take credit for this.”

I messaged a number of friends to figure out who had done this wonderful deed. I even gave some of my friends on Discord a live unboxing (snapping pictures as I went along since I had no idea what was going on).

It turns out that it was sent to us by the voice actor behind the voice of Elizabeth Cushing-Birch on Poplar Cove. She messaged me later in the day, asking me if I had “checked the mail lately.” She had ordered the packages weeks in advance and it was just a coincidence that it arrived on our actual anniversary. Coincidence? Fate? Conspiracy? A message from the gods? Tomato, tom-Ahhhhhh!-to.

It’s June which means that I have a new 30-day challenge for this month. This time around, I have two things I want to focus on. Both of these things require that I set up some healthy habits:

That doesn’t sound so bad, right?

For my writing goal, I want to work on a new story. I really wanted to do my Lovecraftian cozy mystery but that story is tied to some negative emotions. Every time I sat down to write last week I froze. Maybe I’m not ready to pick it up yet? So… What am I ready for?

I guess it’s time for a new project, eh?

More about that next week. This post is long enough as it is.

Secondly, I received my skates in the mail (along with neoprene ankle supports and a pack of cushions/pads/arch support socks, just in case) so my physical activity habit is mainly going to focus around skating. Skate each day (quad or inline), at least a half an hour each day. That might mean that I just roll around on the carpet or Pergo. Or maybe I can be brave and unabashed and go… out… side… Heh. Crazy talk. (Even though our county is technically in Phase 2 now, so I might be about to go out with a friend.)

Oh, and I want to also tack on: No spending money frivolously in June. That’ll be a good habit to reintroduce my wallet to.

A Drink Recipe from The Two-Headed Calf:

Backstory: The Two-Headed Calf is the dry bar we inherited from The Great Husbando’s grandparents. While it’s not healthy to romanticize the “drunk writer” lifestyle of yore, it’s still fun to do. Not be a drunk. That’s not fun. But romanticizing your passion or career can be fun if no one is getting hurt. Besides, a little libation can (sometimes) get the words flowing when I find myself feeling hindered. Please drink responsibly.

“The Kamakaze in Yellow”

In celebration of the mysterious package I received in the mail, today’s drink is called, “The Kamakaze in Yellow.” So you can probably tell that the theme for my particular package was “The King in Yellow”. While they no longer have this particular package for sale, they do have some other ones available.

What you’re going to need:

What you’re going to do with those things:

This site uses Akismet to reduce spam. Learn how your comment data is processed.